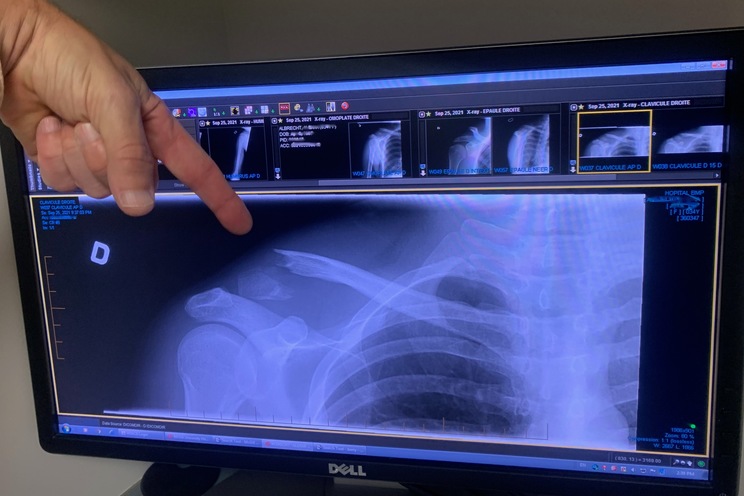 Rayon-X de la clavicule cassée, suite à un accident de vélo 'gravel-bike' à Sutton.
Traduction française non-disponible:
Sutton Québec is known for it's excpetional cycling routes and being one of the best places to ride gravel bikes in Québec.  Lex Albrecht participated in a group ride the day before the 100 à B7 gravel race, but didn't finish the way she'd planned to.  She explains in this video:

"I turned into a very quiet neighbourhood where a Mom and her son were riding in a dead-end street. They'd set up a couple of wooden jumps on the gravel road.  I asked if I could try one, and they wholeheartedly said 'Yes!'.
After a day of having so much fun riding with a great group of people, I was more amped than ever to enjoy riding with even MORE people, and I was stoked to cross paths with this friendly duo.  I made a big mistake though.  I hit the big jump with a good amount of momentum, and didn't even pull up on my bars.  Every time I get on my gravel bike, I'm astounded by how versatile it is, and how tough it makes me feel to go over pretty much any type of terrain that I get into.  Even singletrack trails in the forest.  But I forgot that there's no suspension in the fork to forgive horible handling (on my part) especially coming off of a few feet of 'air'.  I nosedived and slammed into my face, helmet and shoulder.  My shoulder took most of the impact, and I broke my clavicle.
A broken collarbone is one of the most common cycling injuries, and even after so many years of racing, training and playing around on bikes, both of my clavicles had remained in tact.  Now... I am part of the 'I broke a collarbone club'."
Lex Albrecht visited the Montreal General Hospital, Montreal's trauma centre, to discuss options for collarbone surgery versus natural healing with an orthopedic surgeon.  Here's what they decided after seeing the collarbone X-rays together: