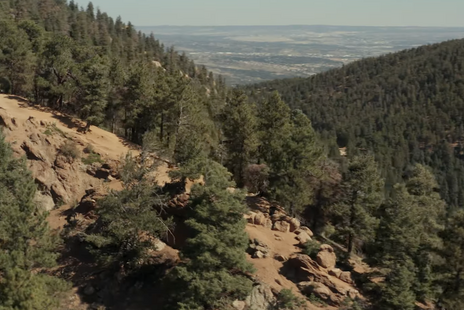 An aerial view of some of the trails of the Pikes Peak Mountain Bike Race course.

Sports Strategies announces another stacked race for the 4-day mountain bike challenge on the slopes of Pikes Peak. $25,000 is up for grabs, split evenly between the men and women’s top finishers.

With defending champ Keegan Swenson having to withdraw after being selected for the UCI Road World Championships, the men’s field has opened up. 2020 APEX Champion Russell Finsterwald from Specialized will be trying to fend off the returning EF Education-Easypost duo of Lachlan Morton and Alex Howes. Lachlan just finished setting a FKT on the Colorado Trail, and Alex is just recovered from an injury at the Leadville 100. Durango, CO will be well represented by two-time Olympian Todd Wells and World Cup U23 standout Riley Amos who have had great seasons so far.

On the women’s side, Juliana-SRAM rider Evelyn Dong will attempt her third podium at The APEX having attended the first two. She will have her hands full with five-time national champion and Olympian Erin Huck toeing the line. Both of these top American cyclists will also have to hold off the Canadian duo of Lex Albrecht and Emilly Johnston, who have taken very different paths to the APEX. Lex is a veteran of the UCI Road World Tour and has just taken on some big mountain bike races this year while Emilly is a well-known U23 rider on the World Cup circuit.

Racing begins at Palmer Park near downtown Colorado Springs on Thursday afternoon and then heads to Cañon City and the Royal Gorge on Friday morning. Saturday The APEX continues in Woodland Park and Rampart Reservoir and finishes on Sunday with a loop in Cheyenne Canyon.