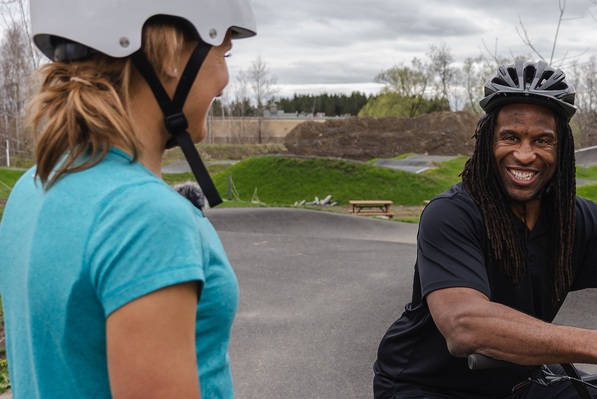 Lex Albrecht and NHL star Georges Laraque are wearing bike helmets, and this can only mean one thing: LexVSLaraque, edition 4.

Lex Albrecht and Georges Laraque have raced three times since 2014.  The first race was on Mont Royal, in the snow.  The second race was a sprint on the Circuit Gilles Villeneuve.  The third bicycle race between Lex and former Montreal Canadiens player Georges Laraque was a full lap around the Formula 1 race track in Montreal.

A fourth LexVSLaraque is rumoured to have happened.  "We may or may not have raced.  You'll see on The Preem TV Show this week." - Lex Albrecht.  Episodes of The Preem Show air every Wednesday, here: (Preem Show (gopreem.com))

Here's a summary including footage of each of the first three LexVSLaraque races:
LexVSLaraque : #LEXvsLARAQUE | Lex Albrecht