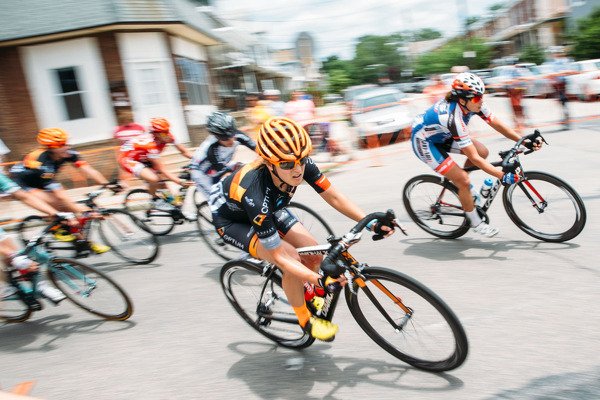 This year was my 5th time racing the Philly Cycling Classic. It has always been my most favourite race of the season. The course is beautiful, the fan presence is absolutely spectacular, and the race is always challenging…in a way that suits me. This year the race was a lap longer than in previous years, meaning we raced over Strawberry Hill, Lemon Hill, and the famous Manayunk Wall 6 times.

Our team plan was to have Jasmin, Amy and Maura on the watch for an early break and to cover attacks, to make sure we had representation in important breakaways. Jasmin attacked and left the peloton for a few laps, scoring a lot of QOM points. Even when she was drawn back in by the other teams, she continued to sweep up the prestigious points and ended up as the Queen of the Mountains (you should see her crown, it’s pretty impressive).

There were a few breaks that went, but none ended up sticking. On the penultimate climb up the Manayunk Wall, the field split as the speed was high and fatigue was becoming a major factor for a lot of the racers. A significant number of riders never made it back on the front group, but we had good representation. Leah, Brie and I exchanged on how we were feeling and stuck together for most of the lap in the dynamic peloton… everyone was fighting for position. Hi-tech and Velocio SRAM had aggressive lead out trains going into the climb.

Brie, Leah, and I were to stick together and work to be at the front in the final turns coming into the Manayunk Wall – the most critical part of the race in my opinion, and the one that is most challenging for me. They attacked into the corner, doing a perfect job at placing themselves where it mattered most, but I got shuffled back – starting the climb behind at least 30 riders. Brie and Leah went super hard to stay up the front, and I did too to make up ground. Around 200m from the finish a moto parked on the course caused one rider to nearly crash in front of me – which was quite frustrating since it is the perfect spot to power past riders who are fizzling out. Leah and I ultimately finished together, with Brie right on our wheels.

Having 3 riders in the top 10 at a World Cup race is a pretty big deal. Especially when it’s the only World Cup race in North America (and personally, my most favourite event of the year). All of the best riders are here, and it gives us an extra boost of confidence going into the Aviva Women’s Tour of Britain. We leave next week.