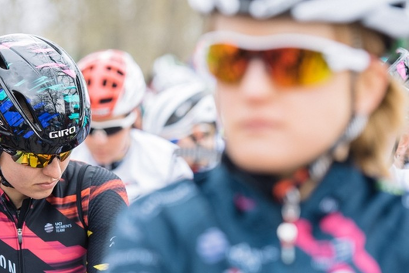 "Following my rocky start to the season in Belgium last week with a minor concussion and several crashes, I was so fired up to race.  My training to get my legs back up and going had gone sufficiently well.

This race is characterized by its tough, pitchy climbs, and 7 white gravel sections.  I had studied the race course well, and picked out important areas that I wanted to pay particular attetion to, to put all the chances of being in contention for a top result at the finish line in Siena, on my side.
However around 45km into the race, my rear tire exploded with a puncture on the sharp stones on the second gravel section.  BePink had drawn a lucky 6th place in the race caravan, but my car never showed up to help.  I heard the mechanic had been helping a teammate who had flatted behind me.  Neutral support eventually had me back up and going, but only after 2:15 minutes later.  By then, the leaders were long gone and the race caravan was too far ahead to use to draft back into contact.

It's tough to accept that a mechanical issue like this determined my race.  Typcially a flat is a big nuissance but it doesn't mean game-over.  I know this situation was completely out of my control and I that I did everything that I could.  I fought to get back at least to a chase group, but to no avail.  Once again, I'm frustrated, but I'll take this energy into the next race, it's the most productive thing to do with it."

BePink's next competition will take place on Saturday March 12 in the Netherlands.  Ronde van Drenthe will be the second event in this year's Women's World Tour series.